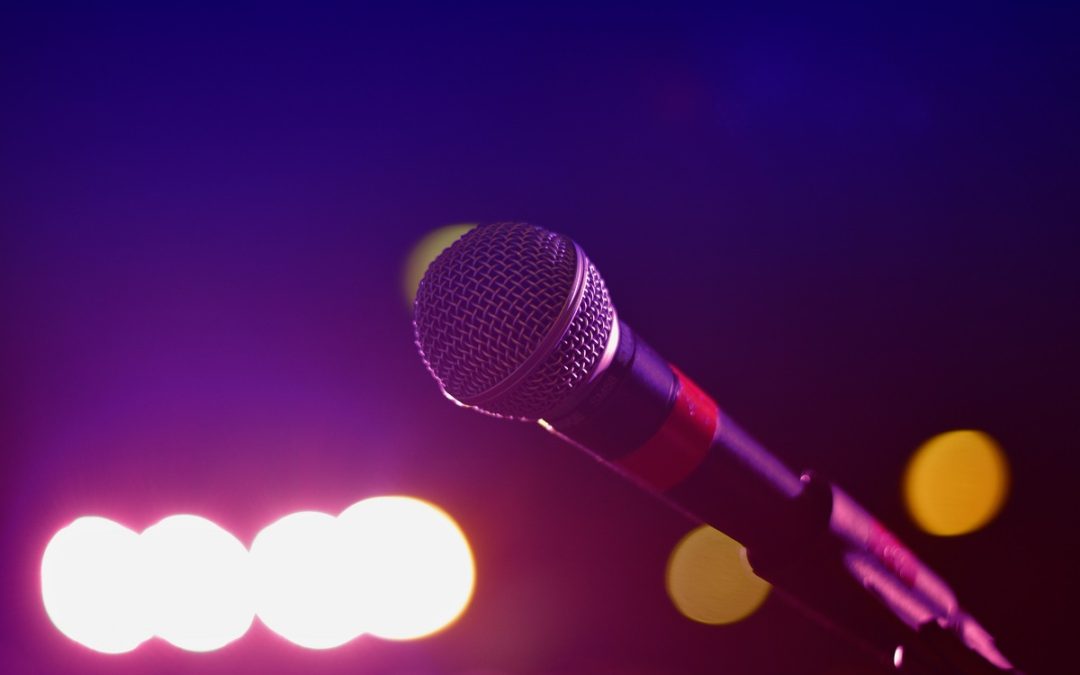 Today I want to discuss my latest musical venture, my upcoming mix-tape titled Lazarus. The project is about 50% complete and I am planning to release it this November. In this blog post I will speak on why I chose the title Lazarus, my thought process in creating music, the way I write, and a breakdown of the concept behind a few of the songs. So now I’ll just dive into my process, hope you guys enjoy!!! 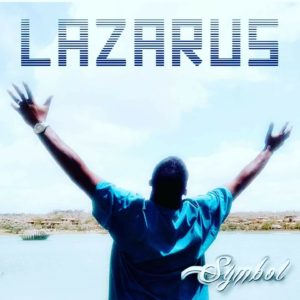 This is the album’s front cover, we had several ideas for the cover but decided to go with this. It was taken by my wife in Fountain Hills Arizona. I was inspired by the photo from Shawshank Redemption when the main character breaks out of jail and is raising his arms, happy for his freedom. We couldn’t do an aerial shot like in the movie but this one from the back came out really good I think.

So obviously the title Lazarus comes from the biblical story of Lazarus, the man that Jesus raised from the dead. Originally the project was going to be called “Eyes but No Vision”, which was taken from Helen Keller’s quote saying ” everyone has eyes but few have vision”. I really liked this quote and it still is one of the main themes of the album. In a sense visualizing where you want your life to be, for me it was visualizing my music and the story I wanted to tell. I do have a song titled Eyes but No Vision, but ultimately I decided to go with Lazarus as the title.

I started rapping in 2003 and continued up until 2007. After that point rap sort of became dead to me as I went on to focus on other areas of my life. I went to college, got a regular job, got married etc. At the time music was a fun hobby but I never took it serious in the sense that this was part of my calling or anything. Most of my friends didn’t think I was a very good rapper anyway, redundant at best only talking about one subject…God. In 2012 I decided to pick up music again and this project has been 5 years in the making. So all in all it has been 10 years since I have released any new material. I released 2 songs off of Lazarus earlier this year. I feel like God has sort of raised me from the dead now that I have a rekindled passion for the music, so that idea is why I decided to name the album Lazarus. 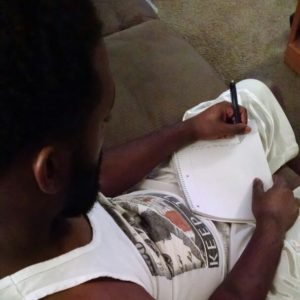 Everyone has their own process for writing music. Some may need to hear the beat as they write, some may just right the lyrics then find the music that fits what they want to say, for me though it’s a little different. I actually start each album with the concept first. Things are always subject to change but I may write down 12 – 15 song titles, before any lyrics are even written. The titles sort of come to me spiritually or I will just be brainstorming. This sets the foundation as to what I will be talking about. I will sometimes pick the name of the album before I decide on what the songs will be named. This may sound weird, but except for my first CD, every other CD has been written in this way. I wrote a total of 4 CD’s. Lazarus will be my 5th official release.

Once the song titles have been partially decided, like I said edits can happen at any time but for the most part, I stick with the originals I selected, I start writing the hooks or chorus. Sometimes I will write lyrics first, in fact for most of Lazarus thus far I have written the lyrics first. Historically though, I would write the hook first and then the lyrics kind of reinforce what the hook is saying. I have always been a Christian rapper. When I first started, my goal was to bridge the gap between secular and christian music. I always made it a point to be a conscious rapper (i.e Nas, 2pac, Common) I always tried to incorporate a positive message or some type of solution to so many of the worlds problems. To this day, I still feel the need to talk about relevant issues, or just tell my story and give a testimony.

By my own admission I wouldn’t even know how to write a “club song”, not that it’s bad, it’s just not in my DNA,and since I don’t really party, I don’t see myself writing party songs. So basically it’s the song title first, then the concept of the song/message, then finally crafting the lyrics. The actual writing may have several edits before the song is done . Here is where you really need the music because the music is going to tell me pretty much how the song flows. The biggest challenge is the way I want to convey my message without sounding too preachy, while also entertaining the listener. I try to always write from the heart and while it sounds like a difficult balancing act, for me it often times comes naturally.

As far as my thought process once I am actually writing, I need to be inspired. With out inspiration it becomes a chore trying to force the lyrics. By writing whats in my heart it eliminates a lot of pressure and because I am an independent artist I am not bound by any contracts or obligations of a record label to make a hit or give the people what they want to hear or what is trendy. I have total freedom to just paint this canvas how ever I want.

God has always been the central focus of my music, so what does that mean? I won’t really rap about excess or from a prideful standpoint or wealth, things that are common in the hip hop industry but also things I feel are detrimental, not just to Christians, but to society in general. A lot of music is profane, I definitely feels it’s important to express myself without using profanity, despite having used the word for damnation in my previous music, but I believe that was me sort of tip toeing the line and since I had heard so much secular hip hop, some of the negative effects rubbed off on my music in it’s beginning stages. As I stated earlier there was a time when I was really trying to relate my music to secular music, in the beginning I didn’t even call myself a christian rapper though it was obvious that’s what I was. 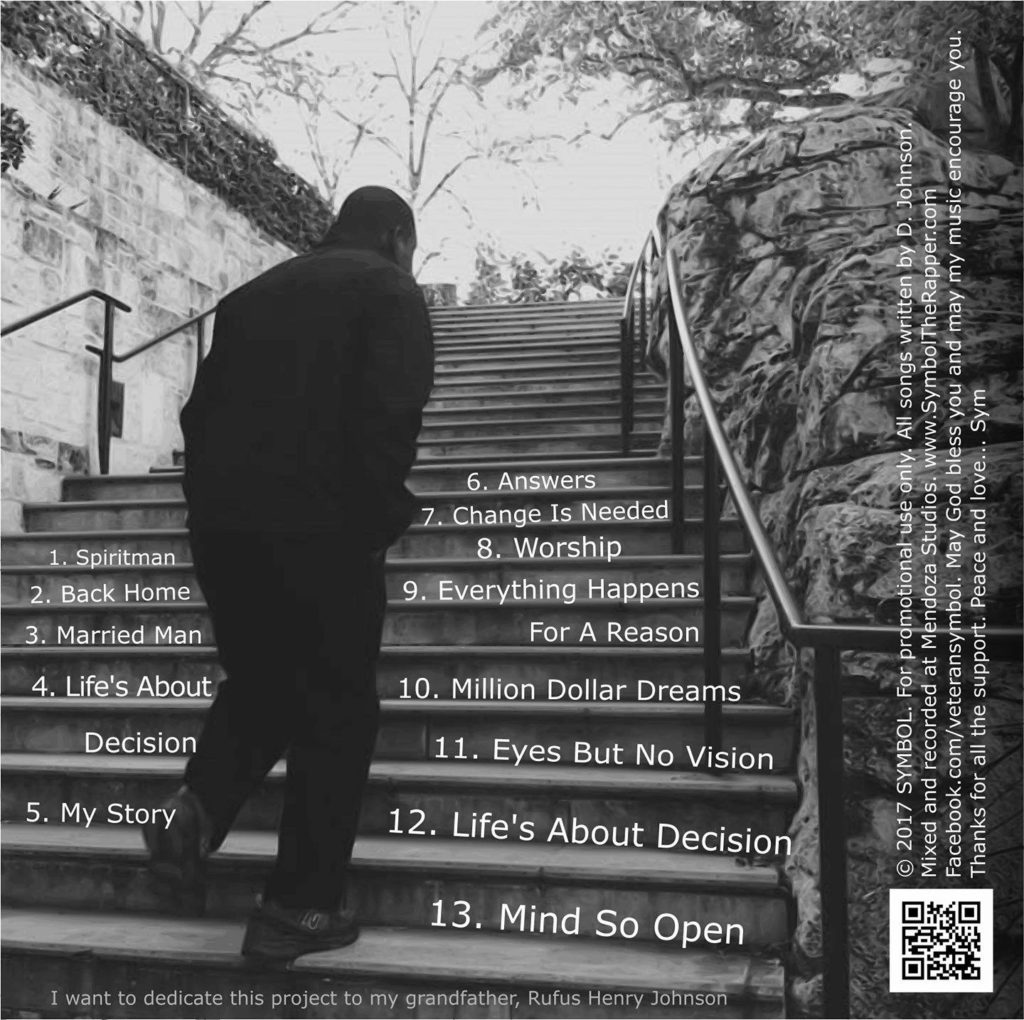 And finally this is the back CD cover. This was the only photo I choose. It was taken in San Antonio Texas on our honeymoon. I decided on using this photo because it is symbolic of me walking away from the rap game as well as leaving behind all my problems and leaving home, albeit reluctantly. We initially had the songs just on the back, then my wife came up with the idea of the song titles going up the stairs which turned out to be a great touch. I dedicated the CD to my grandfather who passed away in June 2016. The QR code actually works and takes you here to the website.

The first song titled, Spiritman  was initially written I think 2 to 3 years ago. Some of those original lyrics are in the version I released this past April. Fun fact before I took a hiatus from rap, Spiritman was going to be the title of my next album after I released The Message 3. I recorded most of the songs for a project titled Pain and Power, but I never officially released it. Anyway Spiritman is my introduction track where I am talking about my return to music, walking in the Spirit and some of the pitfalls that hinder us. I had a lot of fun recording this. The phrase “started from the drawing board,” which is in the hook, was really important for me to state because to me it feels like with my new perspective on life, which I am applying to my music, is really a brand new fresh start.

Back Home, the second song on the album, is talking about being back home rapping and I am contemplating whether I should have ever left the music scene at all. This song is more like a 1 verse introduction and was at first going to be the opening to the album. I also reference briefly me and my brothers relationship and how we disagree on certain religious topics, which is also a theme on the album.

Married Man is a song of me just celebrating the fact that I am married. I have had the most fun with this song thus far. All the lyrics came so naturally and I think I only did one rewrite, it just came out so perfectly. I talk about everything me and my wife enjoy and things we sometimes go through. It is a very special song, one lyric goes “our spirits connected, so I’ll cherish this marriage and never neglect it”. I’m really excited to see how people react to this song!!

Change is Needed is the other song that I also released this past April along with Spiritman. We even shot a video for it with our cell phones and it has got a lot of attention on Facebook. In this song I was really inspired to say something about police brutality after the Anton Sterling killing. I usually don’t watch the news and I know there’s a lot of things that happen that don’t get national media coverage. I was not intending to make an anti-cop song, and I don’t feel that it is, I just am against brutality and people in power or higher positions abusing that power. So the song it self is more about awareness and what we can do to change as opposed to just fighting and answering violence with more violence.

Well thanks for reading and I hope you enjoyed this breakdown of my Lazarus project. Keep an eye out for it this November.