“I’m not a Hip-Hop veteran, but you can say I’ve settled in, plus when I was young Pac’ and Nas was my medicine, a little bit of Biggie, that was the era when, rap was still rap when will this new trash ever end….” 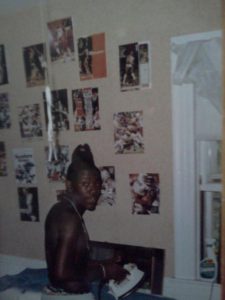 I bought my first hip hop mixtape. it was DJ Clue Summertime stick up. I remember being immediately addicted to the sound, creativity, and overall excitement that came with this new found love of such a distinct musical genre. My actual love for Hip hop began about 2 years prior when I was 12 years old. The first song I can remember falling in love with was Keith Murrays ” Most Beautiful Thing in this World”, is just like that…I get in ya, is what the chorus would repeat. My older brother was a big Hip hop head and was someone I looked up to for a time, so it’s only natural that I was infatuated with a lot of the rappers he listened to. But it was in 1996 when I bought my first $10 dollar mixtape, the momentum had shifted. No longer would I have to ask my brother to listen to his tapes, no longer would I have to guess who this new rapper was (mixtapes generally featured new up and coming Emcees as well as those already established) and no longer would I miss out on rare underground freestyles never to be heard, nor intended to be, for a mainstream audience.

As with a lot of the rap music today, back then it was graphic, and violent but there were also songs with a positive message as well. There are countless rappers I could name, give praise to, criticize and so on, but the main focus of this post is not to defend rap or even condemn it, but to tell my story briefly and how it changed me, good or bad. 1996 was 20 years ago, today I for the most part stand clear of secular (things of the world) music, hip hop in particular. I do not apply this same principle to other forms of entertainment, only music. For me personally it’s the music that stays with me, the music that digs dip into my soul, the melodic sound, the rhythm. Other forms of entertainment like movies and video games, don’t seem to root themselves in me in the same way that music does. One could argue that I am being hypocritical, if I shun secular hip hop, I should shun all secular things. Isn’t it true that all satanic things will take some effect on us spiritually? Well that’s a topic for perhaps another day, today I’m focused just on music.

It was in 2001 when I gave my self to the Lord and as I matured spiritually the Lord began to work on my heart, my everyday life, my belief system, pretty much everything about me. I am just barely a shade of my former self from 15 years ago. During that process I went back and forth as far as listening to secular music and distancing myself from it. For the most part growing up, I heard music but I didn’t listen to what the lyrics were actually saying. The drug and gun references no longer sat right with me as they once did. The degrading of women and overall unimportance of life as a whole didn’t sit well with me. I know there are people who just say rap is evil and is from the devil and it’s misogynistic and in some regards all that’s true. I do want to point out I don’t think I would be the rapper I am today with out the Tupac and Jay’Z and Nas that I frequently listened to. I learned a lot about the art form through that phase in my life, I had even praised their music at one point and I do think that they, amongst other mainstream rappers, like a Kanye West are very, very talented individuals.

I think the important thing is understanding yourself, and knowing how things have an effect on you. I can recall times in my life where I idolized certain individuals and certain lifestyles. I can recall as a teenager trying to emulate these celebrity figures that I had looked up to. As I mentioned God was doing a work in me, and there were a number of things I had to purge from my life in order to reach higher and go where God wanted to take me. Nowadays if I occasionally listen to 90’s era hip hop or the old school music I did as a kid, it’s only for a brief moment of nostalgia.  Now that I actually listen to what I’m hearing, all the sinful stuff just screams at me, to the point where I think how did I not hear this before, It’s crazy. It’s also unfortunate that a lot of times rappers become role models, albeit not directly, but the youth idolize and want to be like these rap stars. One could argue that they have a duty to these young people because they have such an influence and set so many trends. I think that’s the wrong mindset to have. Can we expect holy behavior from those who are unholy? Or should I say should we expect Christian behavior or Christian thinking from those who are not Christian? I do not want to come across as judgmental, all we have is a person’s behavior to draw conclusions from. I have heard rappers and sports figures say they are not role models and maybe it’s the pressure or a responsibility they don’t want to have. Whatever the case may be the youth do need guidance so ultimately it falls back on the parenting.

It’s easy to ramble on with a topic of this magnitude so from here I’ll do my best to rap things up. I am a changed man. Life should change us, we should be growing. If you are a Christian then I believe we should be constantly trying to perfect ourselves through Christ’s example. You hear it said that ” nobody’s perfect” but let’s not use that mind set to believe that we can’t perfect ourselves. It is possible to live a sin free life. I don’t believe God would ask us to do something He knew we were not capable of doing. As with Hip hop, I can never fully forget where I came from, how the music helped me get through situations, the conversations I shared with my peers discussing bars and free styles. In turning away from secular hip hop I opened my eyes to new music like City and Color and Matt Kearney to name a couple. So indeed a time long forgotten has become a time greatly remembered. I’m thankful for all my life experiences thus far. Thankful I have had ears to hear and thankful that through taking things way God has brought me closer to Him. He has made me a stronger man, and in essence given me a gift with music so that I too can affect  people around the world though music glorifying not only God the Father. but also a positive lifestyle.